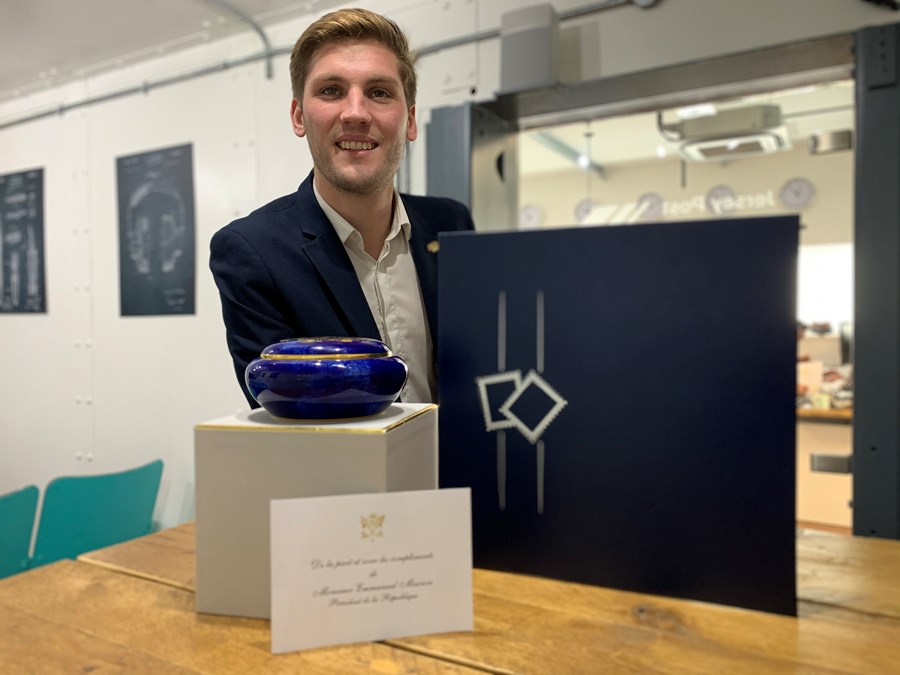 Jersey Post has been named guest of honour at a prestigious stamp exhibition in Paris. The Salon Philatélique d’Automne is an annual event which, this year, takes place from 7 – 9 November. The guest of honour accolade is one of the highest cultural distinctions awarded in France on behalf of the President of the French Republic, Emmanuel Macron.

James Dann, Jersey Post’s Philatelic Artwork and Production Executive, accepted the honour at the opening ceremony of the exhibition in the presence of senior members of the French government, La Poste, philatelic press, philatelic dealers and associations.

“We are absolutely delighted to receive this honour,” comments David McGrath, Head of Philatelic at Jersey Post. “Every year, Jersey Post endeavours to deliver a quality and innovative stamp programme and this year has been a particularly special year for us as we celebrate 50 years of postal independence. We’re extremely proud of the work that we do and Jersey Post’s contribution to philately and we’re thrilled to be recognised at the Salon Philatelique d’Automne, a leading event in the philatelic calendar.”

Every year, prior to the Salon Philatélique d’Automne, philatelic professionals and collectors come together to choose the stamp they consider to be the best stamp issued by the guest of honour country during the last two years, taking into consideration subject matter, cultural significance, design and technicality. This year, the judges chose the Miniature Sheet from Jersey Post’s 2018 issue Popular Culture – The 1960s, which was illustrated by Malcolm English, an award-winning designer and illustrator, and designed by Hat-Trick Design.

The Salon Philatelique d’Automne is organised by the CNEP (La Chambre syndicale française des Négociants et Experts en Philatélie) and takes place at the Paris Expo - Espace Champerret. Jersey Post has a stand at the exhibition on which they are represented by Theodore Champion.

Jersey stamps and philatelic stamp products such as First Day Covers and Presentation Packs can be ordered at www.jerseystamps.com or by telephoning the Jersey Philatelic Bureau on: 00 44 (0)1534 616717.