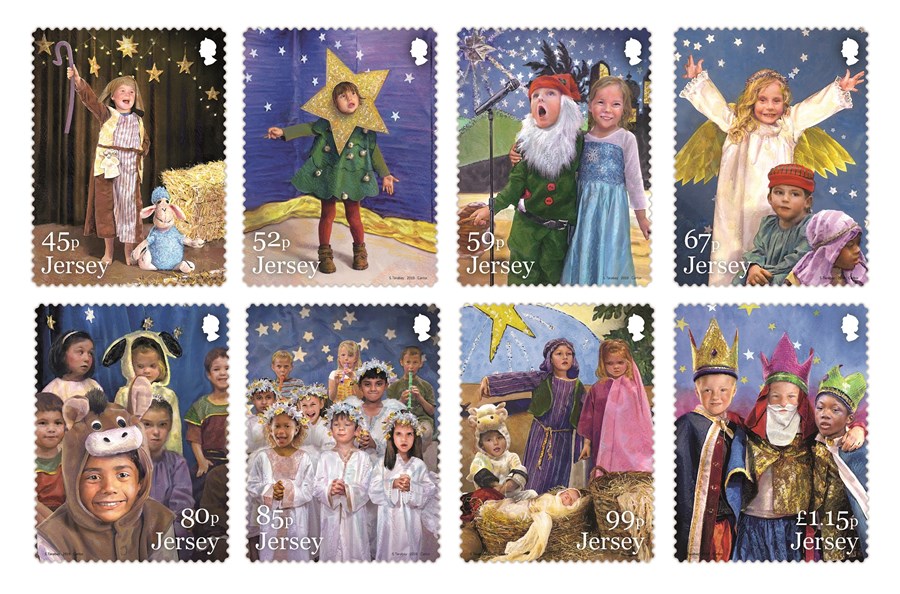 A children’s nativity play is the subject of Jersey Post’s 2019 Christmas stamp issue which will be released on 20 November. Designed by Sharif Tarabay, the eight self-adhesive stamps feature colourful illustrations of children performing in their Christmas play.

Traditionally, children’s nativity plays recreate the story of the night of Jesus’ birth with children playing the parts of Mary, Joseph, the shepherds and the three wise men. In recent times, the nativity play has been modernised and re-imagined, incorporating traditional characters and songs as well as some more modern additions. Tarabay has succeeded in conveying the heart-warming humour of a school play, illustrating the children’s delight and concentration whilst performing and, at the same time, capturing the emotional, often tear-jerking experience of being a proud member of the audience.

As in previous years, Jersey Post has included special stamp tariffs in this Christmas set to allow the people of Jersey to send their Christmas cards for less during the beginning of the festive period. Four of the stamps have been specially produced with reduced rates, which can be used between 20 November and 6 December. Two stamps are for use on larger items of post to Jersey and to the UK, while two bear the standard tariffs for local and UK letters, which can be used after the promotional period.

Sharif Tarabay is a Montreal-based illustrator who works in a range of classic art and illustration styles, creating colourful pastiche images infused with realism and authentic character. Originally from Egypt, Sharif went on to study Fine Art at Concordia University in Montreal. He works traditionally using oils, acrylics, watercolours, pastels and coloured pencils. Sometimes, he’ll use a combination of physical and digital media, delivering realism with a painterly touch.

Jersey Post’s A Children’s Nativity Play stamps will be available to buy from all branches of Jersey Post from 20 November 2019. Philatelic stamp products such as First Day Covers and Presentation Packs will be available from the Jersey post offices at Broad Street, St Helier and Rue Des Pres, St Saviour on issue day and can be ordered now at www.jerseystamps.com or by telephoning the Jersey Philatelic Bureau on: 00 44 (0)1534 616717.