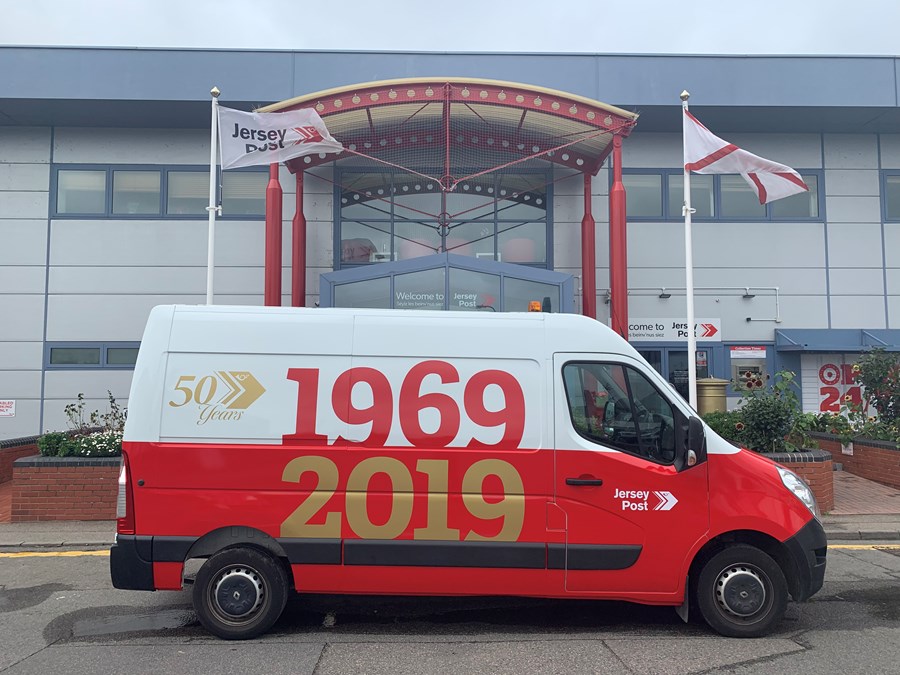 On 1 October 2019, Jersey Post will celebrate 50 years of independence from the British Postal Service.

In 1969, postal independence was celebrated with a simple ceremony at the main postal building, now known as Broad Street post office. In 2019, the celebrations will be somewhat different, and the organisation has planned a series of initiatives throughout the month.

As well as balloons, cakes and other birthday essentials, Jersey Post will be highlighting notable milestones in its rich and interesting history throughout the month of October, in order to emphasise the developments, diversification and acquisitions that have taken place since 1969. Images from the past 50 years will be displayed at post office counters across the island and some of the company’s noteworthy historical moments will be championed through a digital campaign that will run across social media and website channels.

Jersey Post will also issue a set of eight commemorative stamps and a prestige booklet on 1 October 2019. The eight stamps illustrate the growth and change that has happened within Jersey Post over the last fifty years.

Islanders might also like to keep their eyes peeled for changes to some of Jersey’s postal infrastructure that might be taking on a relevant shade for the occasion.
However, perhaps the most important element of this anniversary is the 400-strong workforce, without whom there would be no postal service. Whilst technology has gradually been introduced to facilitate the postal operation and provide quicker turnaround times for customers, the daily operation will always rely on manual intervention to guarantee sorting and delivery.

The employees have been an essential element of the planned celebrations and each employee will receive a 50th anniversary gift pack, as well as the chance to attend a 50th anniversary celebration to thank them for their hard work over the years. In addition, Jersey Post has announced its ambitious plans to invest £1.2m in 2019, and £1m in 2020 in modernisation, equipment, vehicles and IT as well as plans to hire an additional 10 new permanent postal workers - a total investment of £2.5m in the delivery operation at Jersey Post over the next two years.

Niall McClure, Jersey Post’s Managing Director for Postal and Logistics, said: “We are very positive about the next 50 years, and that’s why we continue to make significant investments in people, systems and processes in Jersey to deliver a first class and ultra-modern postal service for islanders.”

Jersey Post also ran a staff competition to name a new beer that was brewed specially to mark the half century celebration. In conjunction with Stinky Bay Brewery, Jersey Post will launch “Postie’s Pride” on 1 October exclusively for employees to toast this milestone with friends and loved ones.

Finally, the celebrations will include Jersey Post hosting the annual Plenary Assembly of PostEurop, the member-driven association which represents European public postal operators. Over 150 attendees from 52 European postal administrations will be in Jersey to attend the two-day conference being held at the Radisson.

“We are thrilled to be able to celebrate our 50th anniversary with the community that we serve, but also to have the chance to provide a celebration and thank you event for our staff, where we will welcome past and present employees.” said Tim Brown, Jersey Post Chief Executive.

“Jersey Post has changed dramatically since 1969, and it’s important that we share our history and the events that have helped to shape the organisation, and the services, that we know today. Here’s to the next 50 years!”

Updates and plans for the celebration can be found on the Jersey Post social media channels.